Coinciding with the celebration of World Maritime Day, the State Coordinator of Maritime Workers awarded the XII #SomosPuerto Photography Contest, which it organizes every year and in which a total of 150 works participated that opted for prizes in the three established categories: the usual ones for Stevedoring and Port Work, and a third and new one called Collaborative Work, with two prizes per category.

In the Stevedoring category, the first prize goes to Manuel Aguado Segura, a versatile stevedore from the port of Algeciras, with the image entitled Well Tight, where we see him tightening a tensioner so that the container does not move during crossings. As he says, “It was extremely cold and very foggy, but we carried out our work with great professionalism and no matter what time or weather we are in port 24 hours a day, 365 days” . The image was captured by a colleague, with whom he assures that he will share the joy of this award.

In the Port Works category, the first prize went to Marcos Pons Ramos, from the Port of Barcelona, ​​with the image entitled Comenzamos, a snapshot taken on board a tugboat that accompanies the person presiding over the photograph during an unmooring with a radiant Sun.

With this award he wanted to “thank all my colleagues for the welcome and the warm welcome I received during my stay with tugboats in Barcelona and, above all, to dedicate this award to my friend Mariano F. He gave me always said that the photos that they were good and that he had to submit them in a photographic contest and as usual he was right, ”he wrote.

Likewise, he decided that “since Mariano F. is not among us, this prize, with all my love, will go to his grandson”.

Regarding the new category, Collaborative works, the first prize was awarded to Sergio Pérez Sémory, stevedore at the port of Las Palmas, for his black and white photograph entitled Sin ti no puede, in which we observe a cold operation which was done in a Dutch pelagic fishing boat, where colleagues untie the strips of fabric from the fish boxes so that they can then be lifted by the crane.

Sergio comments that the temperature there is minus 20 degrees Centigrade and that the companions were immersed in their task, oblivious to the fact that he, who was on relief, had taken the photo. This is the fourth time he has taken part in the competition and he comments that he likes to take advantage of his moments of rest to capture images of port life which he finds interesting because of what they represent and their brilliance. . 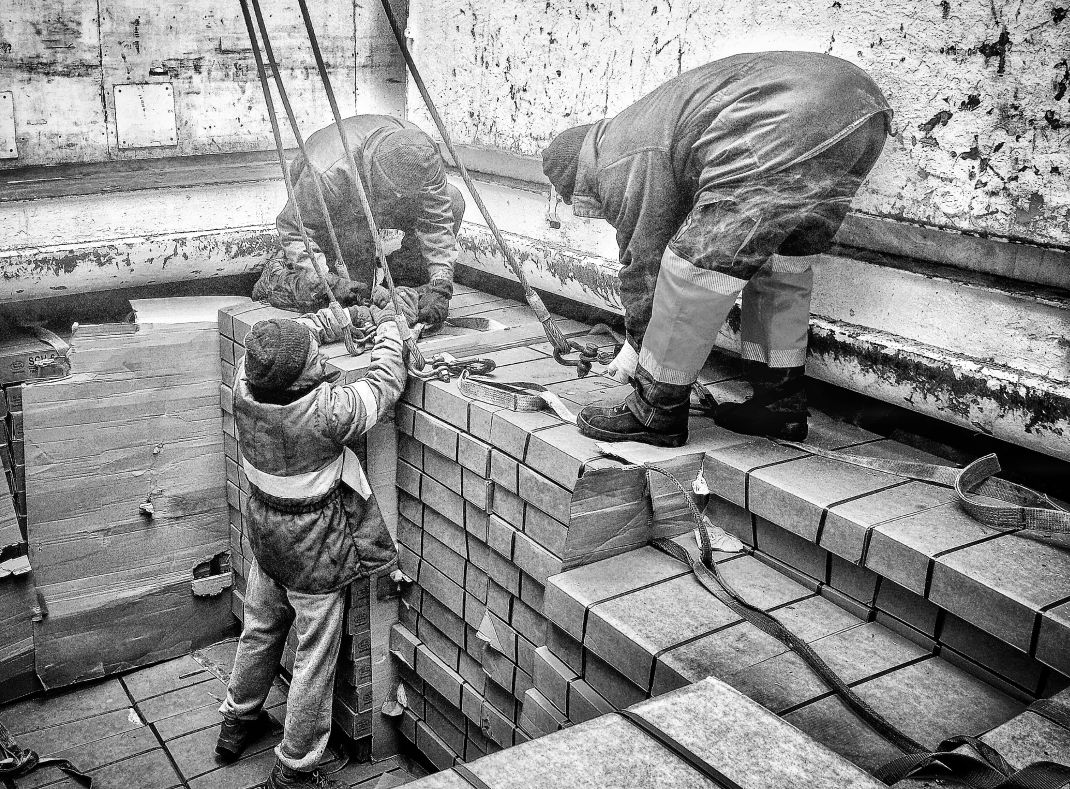 José Antonio Iranzo Giménez, stevedore foreman at the port of Valencia, won second prize in this category for the image he titled Bay de luna (bay of the moon). The image was captured around 9:00 p.m.; He comments that he always carries a small camera with him and that when he saw his colleague at the place he considered perfect, he did not hesitate: “I took a picture of it. “The port offers us many impressive landscapes and as soon as I can I take pictures.” This time he was on duty and he took advantage of the moment when he saw all the elements together: his fellow longshoreman at work and the full moon above him.

He works in trailers in the port of Barcelona and comments that the beautiful sunsets and sunrises are often a reward for the work they do, and he wanted to reflect this with a photo where two tugs are working and the sun is rising. .

“As we have to work guards around the clock, we like to capture, when we can, these kinds of images in the port environment and share them,” he says. This is his first time participating in the contest and he is grateful to be able to offer this photo of his port.

José Antonio Menéndez Álvarez, stevedore of the port of Avilés, turned out to be the second classified in the category of collaborative work with the photograph that he titled Teamwork, where we see a little stevedoring activity known ; in this case, partners place and grab reels. He comments that he was observing the operation and it seemed like a good image to photograph. “It’s a task that requires hard work and coordination, because better things happen together,” he says.

The jury, made up of representatives of CEEP and CETP, was satisfied with the work presented, in which they appreciated aspects such as the quality of the image, the composition captured and the sample of the work carried out in the ports.